The Expression module is one of the two main modulation source signals in Noisy. It is a global control that allows you to efficiently morph the timbre and shape the dynamics of your sound by defining its envelope and tweaking the expressive control knob in real time.

The signal from the expression module influences every parameter within the layer that has Expression amount applied in their respective modulation panel. 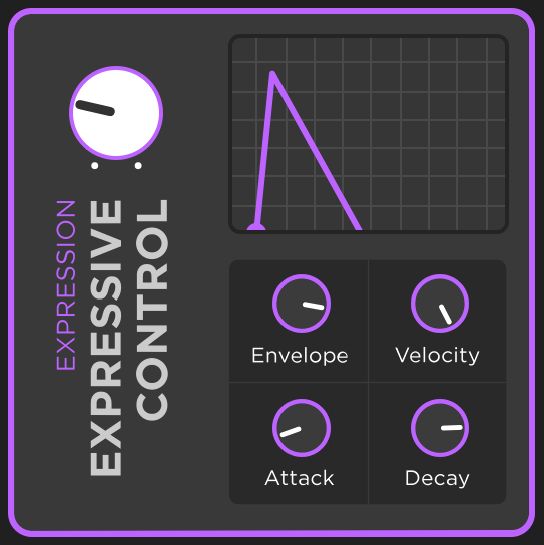 Alternatively or additionally, you can also automate this parameter via your DAW. Manually draw automation curves to add movement and evolving character to your sound.

Sets the maximum amplitude for the envelope. If set to 0, no envelope will be triggered when a MIDI note is played.

Modulates the overall amplitude of the envelope depending on the incoming MIDI note velocity.

If set to 0, the amplitude will remain at its maximum amplitude regardless of the note’s velocity. Higher values mean that the velocity with which you play has more impact on the sound.

Sets the amount of time the envelope needs to reach its maximum amplitude.

Set the amount of time for the envelope to fall back to 0 after reaching its maximum amplitude.

!Please note that the envelope behaves in a legato mode, which means that if you press a second key on your keyboard without releasing the first one, the Envelope will not be triggered.